Gun Barrel City, TX- When Phil Zimmerman and I arrived dockside at Big Chief Landing at Cedar Creek Lake a few days ago, guide Jason Barber had his boat motor idling. The smell of gasoline/outboard engine oil exhaust that is so familiar to all of us that love fishing, hung heavy on the chilly water. The wind was blowing at a steady clip from the north, about 12 knots and there was a bit of ‘chop’ on the water. “We’ve been hammering the blue catfish, both around the cormorant roosts and drift fishing flats around 20 feet deep. Thought we’d catch some fresh shad, then begin our drift just out from Big Chief. Catching the catfish might not be a problem but catching bait might.” Said our guide as we slowly motored out of the harbor. In the cold weather months, shad disperse from the shallows and go deep, where the water is warmer.

I’ve fished with Barber several times and have learned the bass pro-turned fishing guide always packs a few aces up his sleeves. He was dead on about the shad. They WERE hard to catch. We would mark a big pod of bait on the graph, usually hanging close to a creek edge, Jason would throw the net and the fish would scatter before the net fell far enough to entrap them. After enough casts to tire even a young strong man, we had enough threadfin shad in the bucket to begin fishing. Twelve big shad would convert into 24 pieces of cutbait-plenty for a few hours fishing.

We began our drift a mile or so south of a big island not far from the mouth of Kings Creek, where there is a good stand or timber that serves as roosts for cormorants this time of year. “We will begin fishing here and the wind will push us toward the cormorant roosts. We will be able to cover lots of prime big cat waters and hopefully connect with a trophy blue or two along the way, then finish out the day fishing around the roost trees,” instructed Barber. We soon had three rods rigged and fresh shad bouncing merrily along the lakes bottom. Many species of fish bite subtlety in cold water, but definitely not a blue catfish that sees its mid morning snack floating just over its head. You know when a blue takes your bait, even one of those 2-4 pound ‘eaters’. The boat had not drifted more than fifty feet when we got our first taker, a pan size blue that struck like he meant business. So the next thirty minutes went, an occasional ‘pick up’ by what can best be described as ‘fryer’ catfish. 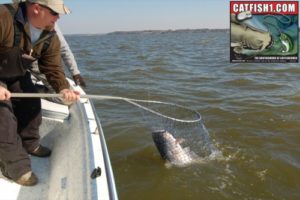 Then, Zimmerman’s rod bowed deeply toward the lake’s surface and he reared back on the rod, making doubly sure the hook set was good. “You got a good one there Phil”, said Jason as he scrambled for the net. I cranked my line in, in efforts to avoid a line tangle at the wrong time and reached for my Nikon. You don’t ‘horse’ a blue that weighs over 20 pounds, you let him do battle against your rod’s flex and your reel’s drag. “Just keep pressure on him, Jason instructed and Phil did just that. The big blue made several strong runs then I could see the tackle and isometrics applied by our buddy was wearing the fish down. He soon came sliding into Jason’s awaiting net. “We’ve caught bigger blues lately but that’s certainly a respectable fish, he’ll make a fine ’picture’ fish.” interjected our smiling guide. 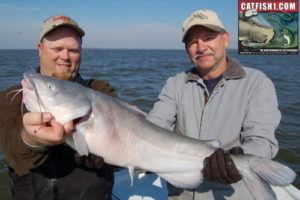 After some back slapping and congratulations, we resumed our hunt for big fish, picking up another nice blue that was close to the same size. We also collected the makings of one fine fish fry in the form of several smaller blues up to about 4 pounds.

Drift fishing on a winter’s day, especially a week day when few if any other boats are on the water, is one of my favorite ways to fish. The sound of the chop against the boat’s side, the breeze at one’s back and the occasional passing flock of ducks and geese overhead make for a very tranquil setting. Barber is also an excellent duck guide and when the passing flocks of teal, widgeon and mallards were close enough he’d give them a loud highball call, a couple of flocks even circled and took another quick look at this boat full of fishermen, seeing nothing of interest, they resumed their flight to the marshes on the north end of the reservoir. Fishing for big blues is much like hunting for trophy deer- periods of quiet, broken by sheer hysteria when a big fish takes the bait.

Just as predicted, our drift took us close to the dead trees, all permanently whitewashed with droppings from years of roosting cormorants. I remembered taking a cover shot for a magazine in exactly the same spot back in the mid-nineties. This time we anchored a long cast away from the ‘point’ tree. We switched to bottom rigs which were, in essence, Carolina rigs with 12 inch leaders. Again, Barber had ‘read’ the waters correctly. We were instantly getting strikes for catfish that had been attracted to the spot by the bird droppings. In short order, we added several more fish to the live well for the upcoming fish fry and, lost one that showed promise of being the fish of the day. Jason set the hook on a nice fish, weighing around 15 pounds and the instance the fish felt the barb, he came straight up out of the shallow water (4 feet deep), just like a black bass, giving us an display of aerial acrobatics that I wish I had been fast enough to capture on film.

A great day on the water with a couple of great friends, that’s what memorable fishing trips are all about. If a winter’s trophy hunt for big blues or duck hunt is what you need to cure an impending case of ‘cabin fever’, give my friend Jason Barber a call at 903-887-7896, 903-603-2047 or go online to
www.kingscreekadventures.com.